WHOOPS DISEASE- 7b2. Problems with Diabetes & MAY Details

Problems with Diabetes during WHOOPS DISEASE include abnormal sugar results and body actions that impact uses of insulin and diet actions. Because Rhapsodie only noted the information on the previous pages, some which emphasize diabetes aspects with Whoops Disease, more is being shared on this page with details of Rhapsodie’s sugars. Additionally Rhapsodie is adding notes on how to understand the information that’s being shared and how she interpreted that information in regards to Whoops Disease.

In the coloring added to these charts the best way to do that, was to put the information on the chart then color it, if I was to run to my computer to add the new numbers without giving time to make sure I’d set the basal accurately I could have colored it up OR down, BUT later would have had to reread and fix the document for what worked.

Since Rhapsodie made these Excel pages, which she calls Accurate 2019 sugar results, she knows what the meanings are without these definitions, but because you aren’t familiar with the pages she is adding information for your reference in referring to the chart images being shared after. The May into June of 2019 pattern was observed in conjunction with her menstrual cycle and how the pattern is timed at least from the last cycle, BUT males may have the same patterning with no menstruation hassles OR not when it comes to WHOOPS DISEASE  because things are weird.

The up & down basal pattern colors

There is more in this section because I saw more layering when looking at this last month of information with the basals. 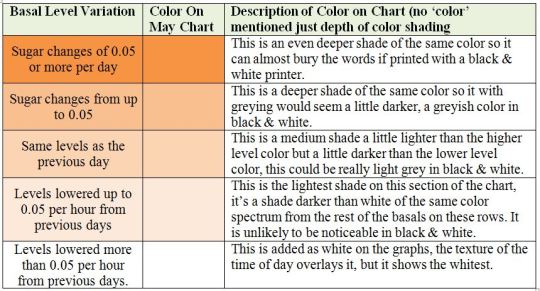 As time goes on with the changes these colors can shift into the new patterns also, BUT it can not be a reference to the previous information with the same colors. Ideas are to shift the shading color spectrum to make this more differentiable, but it’s not yet complete…

TIMES of day shown in columns & a time row

The sugar result rows are from the sugar checker results ONLY

The coloring with this chart are similar to the high & low colors that Minimed charts, BUT I love seeing the greens because that’s my sugar being right.

The horizontal red lines, as you can see with the chart, were placed as indications of when Rhapsodie had the 670G Minimed Insulin Pump sensor turned on.

The spreadsheet workbook Rhapsodie formed is a tool she’s used to keep track of the super frequent insulin changes and how these relate with her sugar levels, she is able to add the Blood Glucose (BG) meter results that the insulin pump charts don’t show. BUT it takes hours each day to add the numbers and interpret the information beyond normal patterns & cycles. The patterns are shifting so often that my chart records aren’t fully accurate, they are based on records I do have and what I remember with times also.

While the spreadsheet can help doctors, for Rhapsodie, she also needs to be watching the insulin pump basal change patterns trying to find consistency for planning future insulin rates. Presently the chart is generally a follow up used to double check her previous patterns, BUT it could help others to set up their patterns if they are aware of things before they get hit with them.

Rhapsodie’s results show odd shifts as you can see from the images. For the basal shifts / changes going back a half an hour is done to make sure that the basal change impacts the body correctly. The insulin change values as results can’t really be observed until the follow day unless additional variations were made before those times because of the previous shifting being information leading to those shifts. With the Minimed 670G the chart that’s available with use of the sensor gives a pattern line that allows the records of when to change better to follow and use.

When the sensor is turned off the sugar tests are the only results of use for the change possibilities. The insulin pump results are not accurate enough for me to trust them alone, that’s why I’ve started appreciating the sensor even though it’s not liked much. So when I’m using the sensor I’ve had to multiply my sugar checking about 3 times more than normal. Part of that could be because of WHOOPS DISEASE changes that are abnormal also such as so much water under the skin which causes the sensor results to be way out of wack. Plus the body with WHOOPS DISEASE holding ‘real sugars’ near the organs instead of on the watery layers filling the body.

What these results show are some of Rhapsodie’s mistakes with these patterns, but also how the shifting isn’t normal insulin use. With working to learn the patterns then dealing with the hassles from these is a lot of work done without any profit other than good health.  That’s a good reason to work this hard.

I’m sorry that the numbers are almost indistinguishable on these pages, I hope you’ll trust that my pattern coloring shows the information of the patterns good enough if you can’t read the numbers.

You can see that there are time variations in pattern records in these rows of information that are not the same as those in the previous 2 sets of patterns.

You can see that there are more pattern alterations on this chart, it’s not as dramatic as some of the upcoming patterning when menstrual hassles shift patterns even more.

There are more pattern alterations on this chart; it begins demonstrating the premenstrual insulin & sugar alterations that are faster than normal. Regularly from my normal body cycle during a premenstrual period my insulin use rises a tenth of a unit for hour over 3 to 5 days. BUT you can see from the High levels previously charted basal insulin was raised over a tenth of a unit in only 2 days.

As was mentioned previously I’m not sure if men have a weird variable pattern also, it could be the creators of the Nanos added a pattern that impacts women as a pattern hitting men also. This chart begins the day my period started flowing with the insulin going up another 5th of unit per hour which is a time and a half of raise. It’s half more than a normal menstrual cycle rise.

BUT things go even weirder because normally with my periods

This cycle was 5 days of high basals in a row, yeehah, no ups and downs. BUT the patterns come back irregularly after these ups.

Beginning to End of May Shifts

that’s a difference of almost positive 5 units per day which is way different than normal changes which are about a maximum of only 2 units per month up and down with menstrual cycles AND other activity change cycles that are more normal. With activity levels going up more normally with better weather these patterns should be going lower, but they didn’t. Here are those summary sections from:

Early May with Basals first in Spreadsheet Records of Rhapsodie

Late May with Basals of Rhapsodie’s Records

These insulin changes are some of the first Rhapsodie has put into record in Excel, so there aren’t earlier comparisons. As you can see the dramatic changes in insulin aren’t normal, and these patterns of changes as mentioned above were abnormal enough with Whoops Disease, that Rhapsodie started making these records of changes for references and for sharing with you, who may be suffering Whoops Disease and diabetes.

For all of these patterns changes continue into June shared on the next post, called WHOOPS DISEASE- 7b3. Problems with Diabetes & JUNE Details.

Please beware they are grouped based on a style of topics.

Rhapsodie has written about these issues for multiple reasons:

1) To have a shared written record, that’s useful. 2) To provide info to others to assist them in planning to deal with the horrid medical system of the U.S. 3) To hopefully impact doctors & health carers to do more work than just using reports which may be false.

WHOOPS DISEASE- 7b1. Problems with Diabetes

This site uses Akismet to reduce spam. Learn how your comment data is processed.