Copied from Previous Post- #02- PAIN Assessments Corresponding with UTI’s– There have been many occasions on doctor’s visits in the last 3 years that they have asked me to rate my pain in a level from 0 to 10, but I can only rate as I feel.  But the doctors cannot make accurate assessments just based on those numbers.  They need to have a real level to vary my level of and they need to have a way to keep the people who are really suffering accurately cared for or they will stupidly make inaccurate judgements as they have with me for over 2 years now.

My Pain Tolerance is HIGH (A Self Assessment)

The UTI infection years ago is evidential of my pain tolerance, but so are the results from care done for an arm that was in pain at a later time.  Years ago I had a plate put in my left arm after a car accident in 2000; back in 2005 the screws through the plate started bothering me.  I ended up at the ‘local hospital’ many months after the bother began, the hospital did a CT Scan and their report was, “There are no problems found.”  It’s a really good thing that I had an appointment with the original surgeon the next week, and it was wonderful that I had the CT Scan Pictures shared with his office.

On the day of the appointment with the specialist who had placed the plate in my arm.  He said I needed to stay for surgery. Because of having driven to the office that day, the next day I went in for surgery to remove the screws that had been coming out of my arm for over 8 months.  I felt almost no pain, but the arm was not right.  The specialist had taken the time to really see the results of the CT Scan before I went to see him, and the screws were removed the following day after the first follow up visit to him in 5 years, which is common enough. 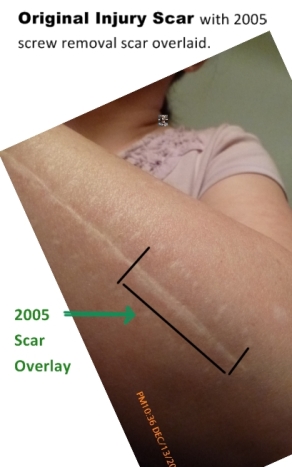 But the INACCURATE ASSESSMENT of the PAIN & the CT results by the other hospital could have caused other major body problems, but I knew my body better and worked to get the proper care.  The specialist did not base his estimates on my pain statements, he had made the time to do a proper visual survey of the evidence BEFORE he even saw me because I made sure that he got the visuals and not only the inaccurate technical reports of the other hospital.

The day of the surgery after the screws were removed the surgeon who took care of the problem said that, “the screws holding the plate on my arm were removed with my fingers, they were barely in the bone,” after I asked why the scar bandage was so small in comparison to the whole plate scar, it was less than 2 inches while the original plate scar is over 4.5 inches long.

In general with a full plate removal, according to a medical document, “…Refracture is the most common complication following removal of implant… The forearm should also be protected from heavy loads by splinting for [2] to [4] weeks…” (Malaysian Orthopaedic Journal 2009 Vol 3 No 1)  This is another evidence that in 2005, my screws as removed by hand, that the PLATE WAS NOT removed, I was told by the professional surgeon, “you can return to work like normal tomorrow, there are no restrictions.”  As I had taken an extended weekend, my return to work the next week was abnormal for a plate removal. The picture, here, displays the screw removal scar.  The plate in my arm has aggravated the present pain situation and proper doctoral assessments, even though the doctors have not heard me because they have been mislead by a lying report. AO Foundation Surgery Reference #1.

Connecting Screws are used in full fractures as is displayed with this clip of information from the AO Foundation Surgery Reference #2 pages.

My original injury was not in the formation of the picture above, it was a sliver of the Ulna punching up through the skin from the doorway pressure fracturing the arm bone.

Rhapsodie has written about these issues for multiple reasons:

1) To have a shared written record, that’s useful. 2) To provide info to others to assist them in planning to deal with the horrid medical system of the U.S. 3) To hopefully impact doctors & health carers to do more work than just using reports which may be false.

This site uses Akismet to reduce spam. Learn how your comment data is processed.